the last storm before the weekend ...
gave the sky a pink glow at 8:45 pm. left from the west, right the east.

the high line park ...
is just wonderful. the standard hotel was built over the park and there are reports people can be seen having 'relations' in the windows. scott was concerned as there were so many kids in the park and took it upon himself to inspect each side. boys!

the chelsea market ...
is fantastic and a must visit. aren't these obama cookies from eleni's too cool to eat? most of my photos from the market were terrible, so i guess we'll just have to go back ;).

finishing projects ...
when they work out as planned is terrific! i wanted to make a 'duvet-type' cover for our chenille bath rug and this one actually fits. yay! alicia's tutorial was great for the patchwork-top using vintage sheets. and, we outgrew the art display board almost as soon as it was done - ugh! these art wires took me quite a while to arrange and required complicated mathematical formulas, tape, and lots of staring at mav's to get them just right. i wanted them to be super-straight, so please don't tell me if they're not ;).

what's making you happy these days? do tell!
26 comments: Links to this post 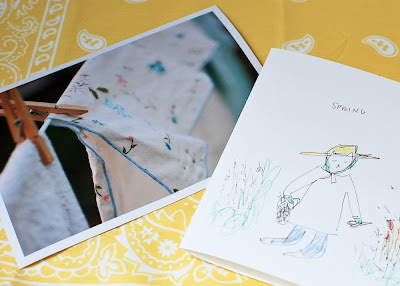 Toni Weber + Jamie Shelman
Toni's clothesline photo reminds me of my Mom and Jamie's cats are the cat's pajamas. 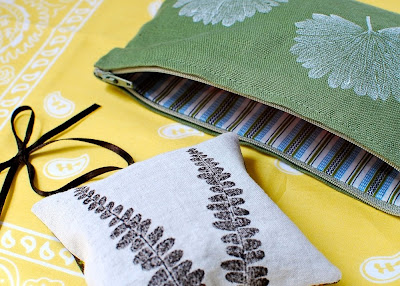 Inleaf
I won the lavender sachet in Lotta's giveaway and bought the zip purse using a $20 gift certificate. 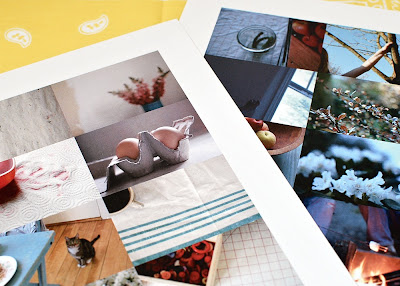 This is the last group of favorites for the week. I hope you've all been as inspired by these talented ladies as me. When I started doing these posts many months ago, I asked Erin if she thought people would think I was 'bragging' by featuring some of the things we've collected. She said not at all and that it was a wonderful way to show support for the handmade community. I believed her as she is very wise and that was the intent. To highlight favorite artists in a very personal way.

Although I do have some favorite lotions and potions, I'm not one for expensive beauty treatments in a salon. Not that I don't need them or don't think they're wonderful. I just really don't enjoy people fussing over me in that way and prefer to have a photo or something handmade, instead.

We have no big plans for the weekend and that's fine with us. The sun might shine, so that alone will be a good start. Have fun!

PS : RIP Neda, Farrah Fawcett and Michael Jackson. No matter how long you live, life is short and so precious. We know it.
15 comments: Links to this post 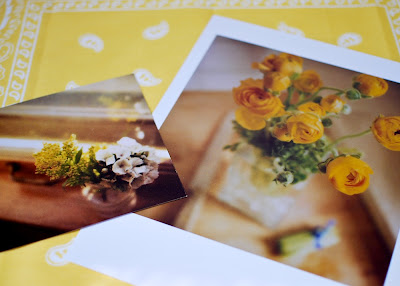 Sara + H
Sara's wonderful print is going to cause me change our entire photography display. 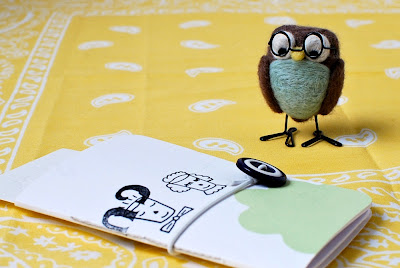 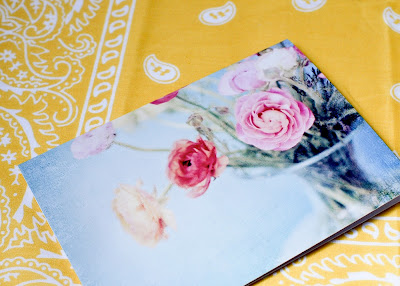 Florabella
Shana Rae's photos are ethereal and her textures are divine. 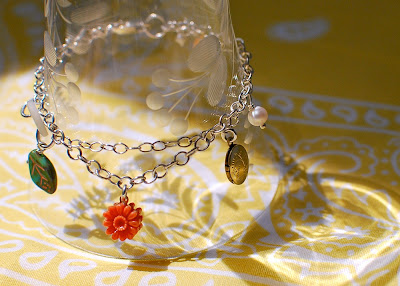 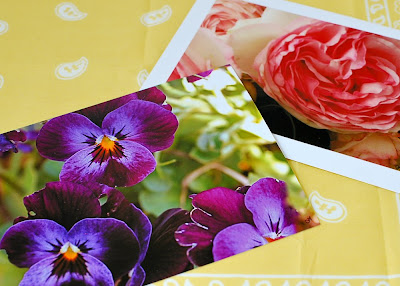 Dolce Chic
I purchased the pansy print from Ms. Candace Rose and she included the rose print because she noticed I marked it as a favorite in Flickr. So sweet and appreciated. 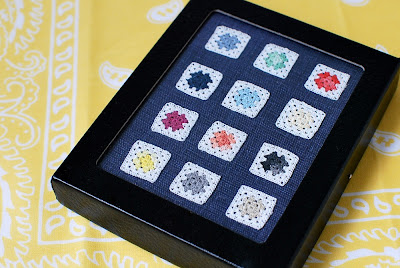 WREN Handmade
I love small things, especially when I don't have the patience (talent) to make them myself.

This weekend I realized -
All week, we'll have favorites photographed on the cheery yellow bandanna included in Cindy*'s Swap box (below). The sun is playing hide & seek in our neck of the woods, but we can deal with it in other ways. 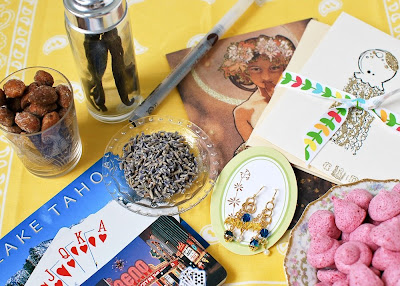 Have a good one!

diptychs featuring doorways and fences at the beach & me in the bathroom, sort of. note: these photos were taken in the hamptons.
6 comments: Links to this post

There was a military reenactment at Mulford Farm Museum while we were in East Hampton. There's a lot of camera shake in that top photo on the right because I didn't expect them to actually shoot the muskets. It was so loud and sudden! I included it anyway because it reminds me of how funny it was at the time.

We're taking Charlie to his favorite Czech restaurant this Father's Day. He's doing ok, but you know, it's not easy. Among other things, he really misses the daily chit chat we often take for granted. And, making reservations for 3 instead of 4 is weird. We're still kind of in shock that Helen passed away and it's only two months, but seems like so long ago. Thanks to everyone who asks about him.

I hope you enjoy this group of diptychs. I am so corny, someone really should stop me ;). Have a nice weekend!

PS More diptychs over here, including my photo, sort of.

Soldier, Kid & Lodgings
'Hey kid, do I look like I'm kidding? That's your tent for the night.'

Cook & Seamstress
'I should have chosen the sewing. Look at Miss Jane Austen.'
They had a turkey, salmon, scallops and potatoes cooking in the fire pit. Yum.

Windmill & Turnstile
They had concerts in the 1680s?

Indoors & Outdoors
It is so, well, quaint.

Swans & Their Flock
The Swans are used to people feeding them and were heading towards us. Yay! And then ...

Swans, Trader & Soldiers
The guy in the upper left bribed them with bread and they headed in the other direction. We were unprepared and had no bread. I think the muskets have HIS name of them. Just kidding, sort of ;).
18 comments: Links to this post

This is the first batch of diptychs from our weekend at the beach. Based on the rainy spring this year, we were lucky to see the sun.

Sportscar & Sidecar
The sidecar is part of Billy Joel's Motorcycles as Art and Icon Exhibit and he was actually there, alone.

Surfer Magazine & Boom Box
Research for sweet surfing dreams and what we'd need as we recover in the hospital if we actually tried it.

Beach & Trike
The Trike is a motorized hang glider and totally cool.

Outside & Inside
We could happily live in either place, especially Dienst + Dotter on the right.

Restroom & Tractor
There was actually a portable toilet (ew!) behind the fence and the tractor reminds me of the Green Acres tv show.
16 comments: Links to this post 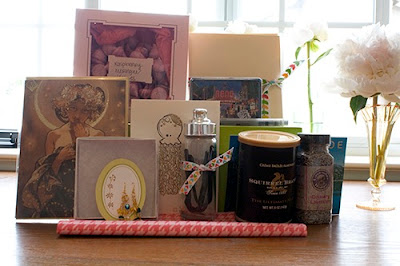 I received the most incredibly generous package from my partner in Nadia's Summertime Swap when I got home yesterday. It was sent by the wonderful Cindy* of Hungry Girl Por Vida and was chock full of the best things, including two CDs of new music that I already love! Cindy* always shares the best recipes on her blog, so I'm very lucky to receive her homemade raspberry meringue kisses.

She also included vanilla beans, which I've never bought for myself because they're always so expensive, edible lavender from Nevada, and some delicious nuts. Scott loves to play cards, so he gets the Reno, NV playing cards, but I get the handmade earrings. It's raining cats and dogs here, so I'll be taking photos as I use the things she sent if/when the sun comes out and will mention some of the new music in a future post.

Thank you so much for the thoughtful package, Cindy*! This swap is so nice because you make two new friends - Sheila + Cindy*!

PS My final photography class was great! People recognized the effort I put into the project more than I did and said very nice things about my work. My classmates had wonderful photos and I particularly admired those taken of people and at night. It's very good to see your photos actually printed and displayed to get a feel for your aesthetic. It's quite different than seeing them on a computer monitor.
7 comments: Links to this post Strawberries from a Farm Stand in Sag Harbor. Strawberries & Brioche for Breakfast at Home.
Picked up the English Calico Teapot, Glass and Dragon Petit Point Placemat at our favorite antique store, Sage Street Antiques. I need them like a hole in the head, but couldn't resist. I've been drawn to cobalt blue a lot, lately. I think it's Scott's Mom as she was a big collector of cobalt blue glass. Blueberry Rhubarb Pie for Charlie's Birthday.
It was supposed to be Strawberry, but it's still yummy.

Thank you so much for the nice comments on the five senses photos. I'm showing them to the class tomorrow, and although I took the class for fun, I'm still nervous. As much as I loved the class and not to be overly-dramatic, I think I'll feel like I'm completing graduate school when it's over. On to the next thing like using what I learned and some sewing this summer.

This weekend we went to the beach for the first time this year. We managed to eek out some nice weather and the strawberries were in abundance. I made some Strawberry Rhubarb Muffins today and the recipe is over here. We brought a pie home for Charlie's birthday and we felt a little bit sad because we always brought it home for Helen & Charlie.

See you later in the week with more beach photos. I'm thinking some of these Les Brumes textures might look neat, although I'm still on the fence about using them. I guess I feel like I should be able to make my photos interesting on their own through technical adjustments in the camera. But, the filters are really fun to use and create beautiful moods. I love these Florabella textures, too.

PS In the last digital lab I mentioned getting LCD screen protectors. I originally picked up the thin films that you peel and stick on. They were crummy with lots of air bubbles and didn't provide a perfect fit. The LCD optical glass screen protector ($10) seems much better.
18 comments: Links to this post 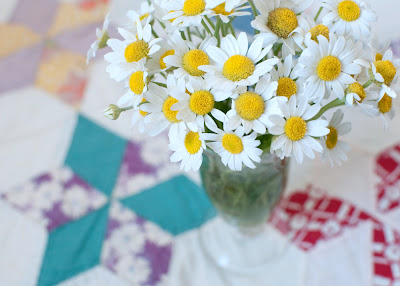 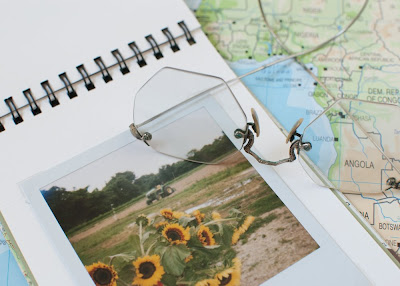 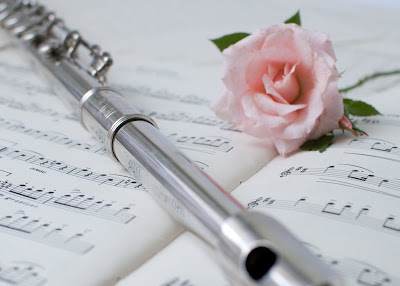 Sound : My Flute from High School 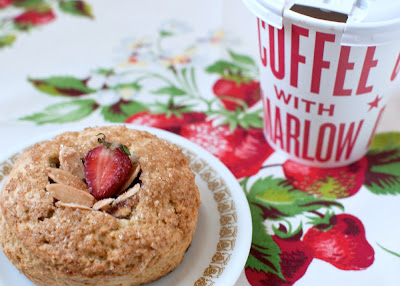 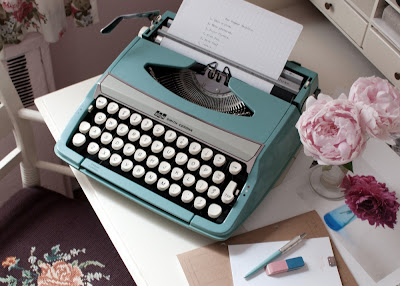 These are the photos I chose for the final project in my photography class. As I mentioned, I decided to do the five senses, which is fairly broad. I narrowed it down a bit by using mostly vintage items in styled-shots. As much as I love flowers, scent was the hardest. I hope I pulled it off ;)?

I really enjoyed this project and by no means am I done with it. I think I'll always have the senses in mind from now on. I'd love to do a series outdoors and on the lookout for kids eating ice cream, standing in the rain, or fields of flowers as some of you suggested.

We're off to the beach this weekend, so we'll see you next week. Have fun and enjoy it will all of your senses!

PS I did make at least a couple of mistakes with these like forgetting to take the polarizing filter off for a few - yikes! Sometimes, I just get too excited. Sounds like an idea for a checklist ;).
36 comments: Links to this post 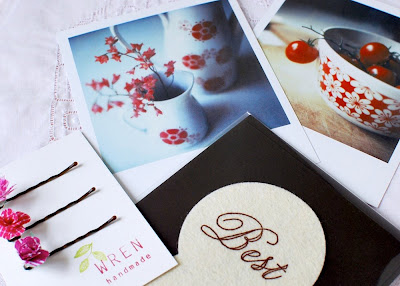 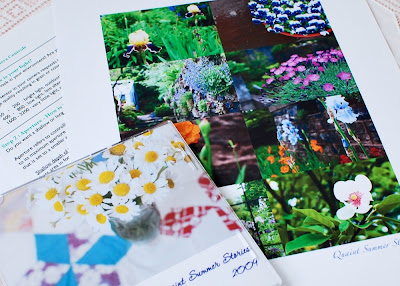 I'm participating in a summertime swap over at Nadia's and supposed to post a photo of my package before mailing. The recipient is to remain a secret until she receives it, but here are the things I'm sending according to the guidelines -

* Digital Lab summary because she recently purchased a DSLR.

* Quaint Summer Stories playlist, which includes these tracks -
I really enjoyed pulling together the playlist and hope she likes my choices. She's also recently celebrated a birthday - Happy Birthday!

Note 6.12.09: My swap was sent to sweet Sheila of Another Lifetime.
13 comments: Links to this post