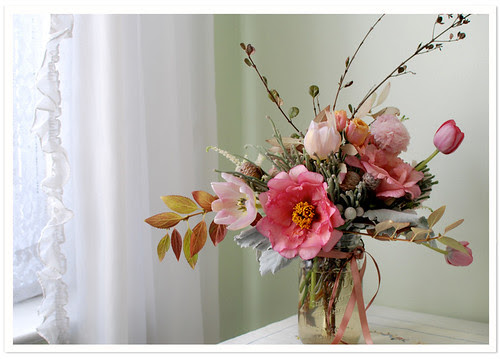 hello, hello! if you follow me on twitter you know that friday was kind of crazy. i spent most of the day with charlie while he had a medical test at sloan-kettering and was there just in case. i saw a lot of people of all ages who were either about to begin cancer therapy or after they've finished. it was sad and i realized, and not for the first time, that i worry about a lot of stupid things. it was a wake up call of sorts because just like that things can change. 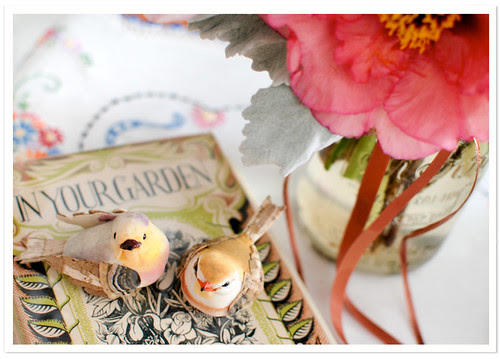 when i got home, i found out i won this gorgeous bouquet of flowers from saipua in sarah's just because initiative! she delivered them herself and it was really nice to meet her. i took photos of them everywhere and wanted to do it well because i love sarah's photos. here they are in our living room with some vintage birds from ethanollie and a classic gardening book by vita sackville-west, in your garden. 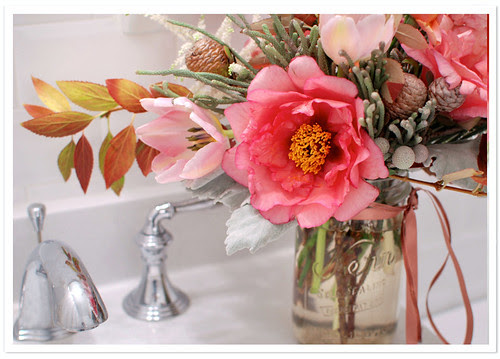 in our bathroom with our saipua saltwater soap nearby. 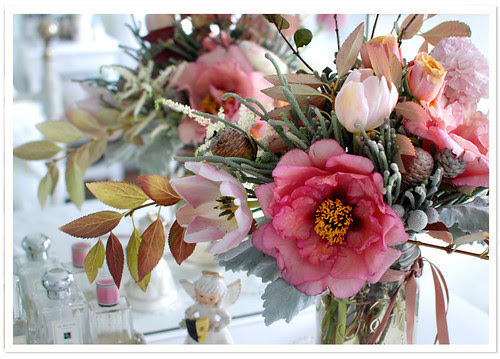 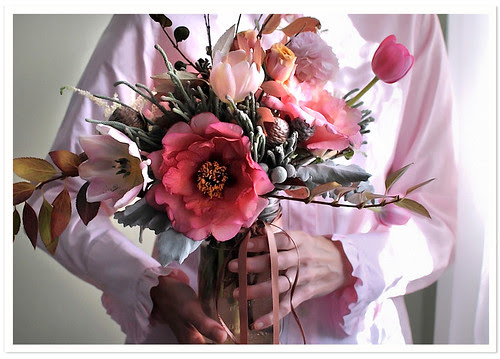 and, in my death grip, which was inspired by the movie bright star - those ruffles. thank you so much, sarah! even though i said it just last week, you reminded me that the sun does come out. the saipua just because initiative continues each friday, so check it out here.

ps charlie did ok in the test. he had a similar one in the summer with a different doctor, so we know what the results will be. it's just too bad that doctors don't seem to be willing/able to share test results to avoid duplication, lost time and extra $$. oy!

Everytime I see these flowers they get prettier! I am so happy you won them!! Enjoy my friend.... xo

Oh, Cindy, these photos are just gorgeous!! I particularly like the one you did in the bedroom, the light seems perfect for these lush blooms. Wow!

great photos. i'm a big fan of fresh flowers in the house.

so happy to find your blog via a comment on darjeeling dreams, one of my favorite reads. happily adding you to my reader.

That arrangement is gorgeous!!!!

thanks, everyone! they didn't make a mistake line ... each one wants their own tests even if they're duplicative.

Sorry you had a crazy day... I too worry about some small things and it's a good feeling to realize it :) (then stop it!)

the flowers are gorgeous! maybe I'll go buy myself some this evening.

That's the most exquisite bouquet of flowers and the pictures are gorgeous - so crisp and the light is perfect in every single picture!
Keeping my fingers crossed for Charlie...

Glad to hear that he did ok in the test.
And congratulations on those flowers - they are SO gorgeous!

The flowers are gorgeous! and you soooo deserve them!

i wont rant on about the medical systems all around the world... it wont change a thing. i hope that charlie and the two of you will encounter wonderful people who are in the medical profession :)
lots of love and many good wishes!
xo

thanks my dear ... actually, everyone in that hospital has been amazing. their values are very clear ... empathy and kindness.

What an elegant bouquet of flowers! Lovely colors - they go nicely with all of your backgrounds :)

And I hope things are going better - sorry to hear that you had a crazy day.

oh how i love those flowers
and your photos
and your ruffles :)
thanks for the update on charlie...
still remembering him in my thoughts and prayers

when i finally figure out that twitter thing (don't i just sound like a little old lady?), you will be the first person i follow
;)
michelle

Your special bouquet of flowers is just GORGEOUS Cindy! And you captured them BEAUTIFULLY on camera! My favorite is the first photo - LOVE IT! I'm so happy you were the recipient of something so lovely - you give so much to so many :) Send my best to Sweet Charlie too :)

These photos are gorgeous. Lovely blog.

People Who Know Me Would Say: said...

That particular bouquet of flowers has a lovely vintage look to them. Beautiful.

what a gorgeous "just because" gift! i'm glad charlie made it through the test OK!

Congrats on winning! Love the flowers. I hope my buddy, Charlie is doing well. I feel bad I didn't know he was going in for tests...I'm so bad about checking twitter these days, they're deleting my replies for some odd reason and have done nothing to fix it.

I hope you're doing well! I know this must be very stressful for all of you, I wish you the best and that Charlie's cancer goes into remission!

Glad Charlie is holding up. Hospitals sure do whack things back into perspective.

Gorgeous, gorgeous flowers!!! This was kind of like the garden gnome traveling around the world, only in floral and local form.

The flowers are amazing - what a wonderful delight on a hard day. I wish you both good health and love. Thinking of you! (ps. Bright Star = awesome)